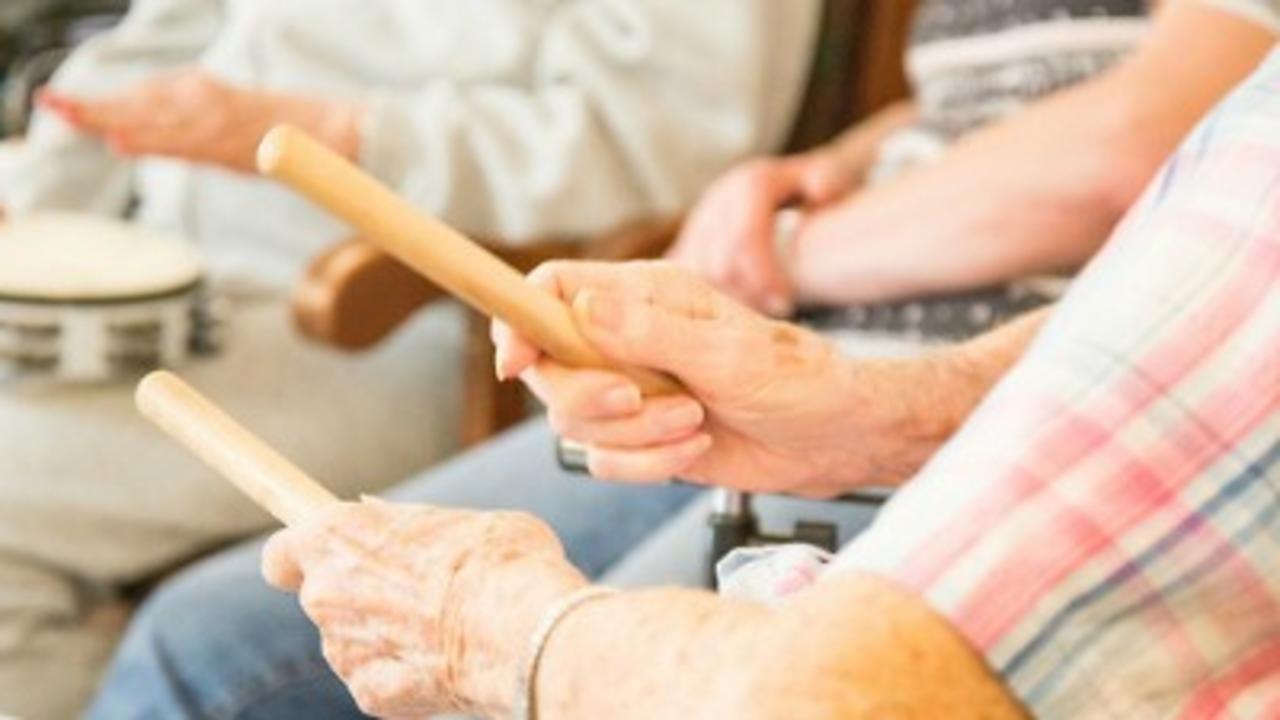 My name is Zachary Brown, and I am a grade 12 student at Sir John A. MacDonald
secondary school as well as an aspiring music therapist. Recently I was able to experience two whole new sides of music therapy that I hadn't been exposed to before.

During one of my visits to a long term care facility that I've been volunteering at, I got to sit in on a one on one session between Laura, the facility's music therapist and one of their residents. I got to see Laura work alongside the physiotherapist that works there as well, while they worked with another resident. Both of these experiences introduced me to a new world of music therapy that is vastly different than the group therapy sessions I had been exposed to before.

There is something truly special about setting aside a time to devote all your energy to one person. I saw this firsthand, as I witnessed my first ever one on one music therapy session. When we met the resident for her session, she appeared at first to be totally unresponsive. She did wake up though, but struggled to speak, seemed very confused about where she was, and did not respond to Laura. Once we had begun her session though, she became increasingly engaged! Previously she had struggled to speak, but by the end she was singing, understanding, and talking about a song that she had previously helped write about her life and memories. Earlier, her body was very limp and physically did not respond to her surroundings, but as the session continued she was singing, and began to tap her foot to the rhythm of the song. She was even able to respond to Laura’s prompts, and correctly read the sheet music Laura was playing off of. She had been totally transformed by the power of music therapy.

I realized as I was reflecting on my visit that although I knew music therapy was for me, I had a conception that physiotherapy was more important and influential than music therapy. That being said, after my visit to the long term care center I’m not sure this is the case. This session involved the physiotherapist supporting an elderly lady and her walker as she walked through the halls. Laura walked in front, facing the lady while singing and playing her guitar. At first I was jokingly questioning if there was some hypnosis going on, because the lady was walking almost exactly on beat with the music. It was incredible to see this woman, who definitely could not have managed more than a few steps on her own, stepping to the beat of the music which was much faster than she seemed capable of. With the help of the two therapists, the resident was able to walk a full 200 meters. This seems like a small amount if you walk everywhere everyday, but would seem an impossible task to someone who spends their day in a wheelchair. This lady, while doing a seemingly impossible task, was even able to sing and dance a little while listening to that music. After the session, the two therapists remarked that if I thought this was incredible, I should see another man that they work with. This man is only seen regularly by the physiotherapist, who can generally only coax him to do 50m of walking. However, when he is seen by both the physiotherapist and the music therapist, he consistently can reach or surpass 150m! That is 200% more walking than without, which this man needs to stay healthy, though the power of music. This is not to say that music therapy is better than physiotherapy, but in my mind it does set them much closer to equals.

Just weeks after my first introduction to music therapy I feel like I have unveiled many completely different worlds. Each one is so unique in how it operates and how it affects those who come in contact with it, but each of the different aspects of music therapy seem to share a common bond. They all use music to transform the lives of those who need it the most.